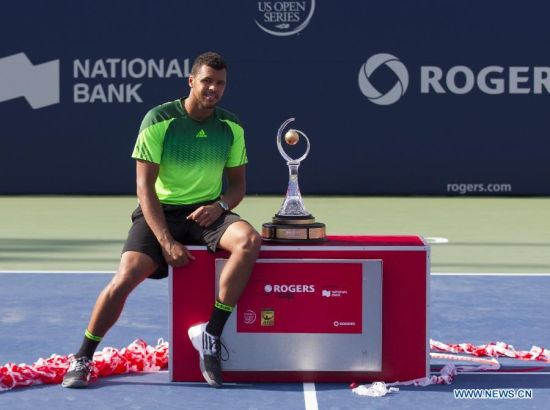 Jo Wilfried Tsonga is the defending champion at the Rogers Cup. He defeated Roger Federer to win the 2014 edition.

With the Rogers Cup underway next week for the men in Montreal, the top seeds have been announced with World No.1 Novak Djokovic leading the way. The seeds for the Rogers Cup in Montreal were released. The city located in Canadian Province of Quebec will host the men for the Rogers Cup while the women will be in Toronto. The major omission from this tournament is world number two Roger Federer. The Swiss maestro said he will not be playing in the Rogers Cup so he would be fully fit for the US Open.

Despite the withdrawal, the seeds and players who will be featuring in the main draw are set for the first Masters 1000 event of the North American hard court swing.

The top 16 players will be seeded in the tournament with the top eight receiving first round byes. With the seedings using this week’s ATP rankings as the landmark, native son and crowd favourite Milos Raonic has been seeded 8th and is the last man to receive a bye in the opening round (all top 8 seeds receive 1st round byes). This benefit is because World No.7 David Ferrer had announced that he has withdrawn from the Montreal Masters due to the elbow injury. The Spaniard suffered an elbow injury during the tournament in Nottingham and has also missed Wimbledon (the Spaniard had made 50 consecutive major appearances before missing Wimbledon). American John Isner is the last player to get a seeding (16th).

World No.1 Novak Djokovic (winner in 2007, 2011 & 2012) claims the top seed while Andy Murray (winner in 2009, 2010) avoids any clash with the Serb until the final getting seeded second. Federer’s fellow countryman and French Open Champion Stan Wawrinka is third with last year’s US Open finalist Kei Nishikori occupying the last man to own a quarter. Last week’s winner in Hamburg, Rafael Nadal (winner in 2005, 2008 & 2013) is seeded 7th.

Four French players earn a seed, albeit in the bottom tier of the seeds. The top-seeded Frenchman is Gilles Simon at 9. Defending champion Jo-Wilfried Tsonga and Richard Gasquet follow right after at 10 and 11 with Gael Monfils picking up the No.15 spot. Two Americans, Atlanta champion John Isner and rising star Jack Sock, get direct entries into the tournament. Isner isn’t in the only big server with a direct entry. He’ll be joined by powerhouse servers Lukas Rosol, Sam Querrey, and Ivo Karlovic in the first round. Young guns Dominic Thiem (who won the Suisse Open Gstaad last week), Nick Kyrgios, and Borna Coric all look to make their mark on the Masters 1000 stage just like Raonic did two years ago.

Canadian Vasek Pospisil was given a wildcard into the main draw after his ranking dropped outside the top 30 because of he is currently defending final points in Washington DC at the Citi Open. Like his fellow countryman, he put his name out there on the main stage two years ago when he faced off against Raonic in the semifinals. A third Serb will be in the field, alongside Novak Djokovic and Viktor Troicki, and it will be Janko Tipsarevic. The former top ten player has been battling injuries for over the past year and will be using his protected ranking to give him a spot in the main draw. Four Canadians get a wildcard into the Montreal main draw while Ernests Gulbis leads the way for the wildcards into the qualifiers.

The wildcards for the 2015 Rogers Cup have been announced. The headline player to receive a wildcard is Wimbledon quarterfinalist Vasek Pospisil. Due to him having to defend points at the Citi Open (was a finalist last year), he fell out of the top 30. After looking at the field, it looks like he would’ve gotten in without any problems if he were still there. Philip Bester, Frank Dancevic, and Filip Peliwo join Pospisil as the other three Canadians who were granted wildcards into the main draw. Bester is the Canadian number three and is ranked outside the world’s top 200. The last event he played in was the Granby Challenger in his home country. He had a fantastic showing at the Challenger event but would go on to lose in the final to Vincent Millot. Can anyone stop the Novak Djokovic Juggernaut?

30-year-old Frank Dancevic is the second of the three other wildcards. Dancevic hails from Niagara Falls and is just ranked a few spots below Besler. His last tournament was in the Lexington Challenger. He would only win one match before getting knocked out by Guilherme Clezar. In Granby, he lost his opening match to Shuichi Sekiguchi in three sets. The final male wildcard goes to 21-year-old Filip Peliwo. The French native was born in which has allowed him to get the wildcard as well as his Canadian Davis Cup representation. Just like the other two men, Peliwo played in Granby. However, his fate was the same as Dancevic’s losing in the opening round to American Eric Quigley.

The shocking news was the fact that 14-year-old Felix Auger-Aliassime did not get a wildcard into at least the qualifying draw. The four men who were given wildcards into the qualifiers were Ernests Gulbis, Peter Polansky, Brayden Schnur, and 17-year-old David Volfson. The fact that Aliassime is not too far into his teenage years could be the reason he did not receive one, but Eugene Lapierre, the tournament director in Montreal, said that the calibre of the qualifying event might be too much for the 14-year-old.

However, that statement loses most of its validity due to Volfson being given one with a less stellar recent resume compared to the 14-year-old. Aliassime qualified for the Drummondville Challengerwhile Volfson lost in the first round of qualifying. Aliassime also made the quarterfinals in Granby losing to Yoshihito Nishioka. If anything, the stage for the qualifiers is more suited for the 14-year-old than the 17-year-old. It’s a disappointment many won’t get to see tennis’ next wonderkid, but we’ll see if Volfson can live up to his talents this week.