1083 days and counting!!  8-July-2012 saw Roger Federer lift his 7th Wimbledon trophy after getting the better of native son Andy Murray. He tied William Renshaw and Pete Sampras for the most titles at the All England Club extending his overall grand slam tally to 17. He fell to the ground in victory, roared and embraced the British Crowd with respect for his opponent and wept in front of his twin daughters. Since that momentous day the wait for 8 and 18 continues…

An old saying – the one undisputed force in our universe is “AGE”. The harder you try to stave it off; it more or less gets hold of everyone with its aggregated effects. Roger Federer whose Tennis is immortal is not immune to this ultimate inevitability.

CROSSROADS IN HIS CAREER Federer, who will turn 34 this August, is firmly approaching the twilight of his legendary career. He is not as dominant as he used to be and his on court success in recent seasons is slowly declining. You can possibly feel that the reason for his success’ becoming sporadic is “Roger is no more in his prime”. The Swiss man still produces many flashes of wizardry from his famed RF Wilson Wand (be it the 90 square inch or the recently changed Wilson Pro Staff RF97). But over the last few seasons, those brilliant moments are diluted which can be attributed to inconsistency. Simply to say that, Federer can’t get out of bed and call upon his best game like he used to. The unreachable peaks which he had once set is going out of hands (Federer was 315-24 between 2004 &2007; an astounding 93% win-loss record).

Federer’s been unable to push the grand slam tally ahead which seems to be stalled at 17. The 3 year period without a grand slam includes only one major final appearance. He did come perilously close to winning his 18th major but lost to Novak Djokovic in the championship match at last year’s Wimbledon (coming back from match point down in the 4th set to push it to a decider).

Federer is at the very edge of his career and solid performances in majors are what he is looking for. This will not only increase the gap between Rafa and his tally (Rafa is at 14) but will perhaps significantly giving him the upper-hand in the ceaseless debate for the “Greatest of all time”. Federer defeat of Murray at the 2012 Wimbledon Final seemed like a potential late-career thrust for the Swiss. Instead his performance have deteriorated since then, losing before the QFs at four of the last 11 slams he has entered something that was unknown in the preceding eight season (2004 French Open was the last time when Federer lost before the QF; lost to Guga; his streak of 36 consecutive QF was ended at 2013 Wimbledon by Sergiy Stakhovsky).

With his recent struggles against the baseline heavy-weights and his more than mediocre 2013, Federer tried to do a few things to come back into the scheme of events. He hired Swede multiple grand slam winner Stefan Edberg (his childhood idol) and added him to his coaching staff along with co-coach Severin Luthi. This was after he parted ways with Paul Annacone (Annacone led Federer to two straight year-end championship in 2010 and 2011, a return to the World no. 1 ranking, and his seventh Wimbledon Championship in 2012). Also he switched from his trademark 90 square inch racquet to a larger frame (97 square inches) in turn forfeiting his characteristic control for more pace and safety.

Edberg has managed to give him his own strategy of more net approaches to keep the rallies shorter and spare his body of the battering which modern day players endure from the grueling baseline game. These modifications to his game have aided him to reap the fruits to a certain extent but he is still in search of a major which seems to have eluded him with time.

The hiring of Swede legend Stefan Edberg seems too have done wonders when it comes to the best-of-3 format. The Swiss is a staggering 76-11 in this format since hiring Edberg but when it comes to the best-of-5 format, Federer is just 31-7.The main objective behind Edberg’s hiring was to aid Federer to further enhance the grand slam tally but the combination is still in search of a major title.

The main obstacle at this point of time seems to be that he is required to play best-of-5 sets in a major which takes a more severe toll on his body. Since with age, the recovery time seems to have deserted him and he needs a flawless draw to enhance his odds. Possibly his best chance came at this year’s Roland Garros. Although clay his Roger’s worst surface he had the best draw in ages when he managed to avoid Djokovic, Nadal & Murray in his half. Yet it was his good friend and compatriot Stan Wawrinka who produced some incredible tennis to knock the Swiss Maestro out of the French Open (This was the 1st time Federer failed to break his opponent’s serve since 2002 US Open; lost to Max Miryni). Wimbledon is one place where Roger always manages to produce his best tennis. His resume on the pristine lawns speaks volumes – he is a 7-tim champion (2003-2007, 2009, 2012) at the All England Club. The Centre Court at SW 19 elevates his game to a different level and Federer in his all-white Nike attire produces genius and wizardry once he steps on this court (Something like a Van Gogh or Picasso). His kick serves his precise forehands, his low-bouncing slices and his clutch volleys. These have been his main weapons on grass that have carried him to unparalleled success. Can he do it again?

Federer finds himself in the best of form once again on the greens as he managed to win Halle for a record 8th time defeating Andreas Seppi in the finals. This is the perfect prelude for yet another burst at Wimbledon 2015. His victory in Halle saw him become the 3rd man to win 8 or more titles at the same event (Rafael Nadal has nine Roland Garros titles and eight from Monte Carlo and Barcelona, while Guillermo Vilas has eight from Buenos Aires).Federer had some tough competition to deal with at the newly upgraded ATP 500 event. He got the better of German Philip Kohlschreiber, Ernests Gulbis, Florian Mayer and ace-machine Ivo Karlovic before dealing with his 2015 Aus Open conqueror Seppi in the championship match. The most important factor was that Federer dropped just one set in the entire tournament. He played a total of 6 tie breaks and won them all. His serve and backhand down the line often came to his rescue. With this win at the Gerry Weber Open, he will take enormous buoyancy and enthusiasm onto SW19. 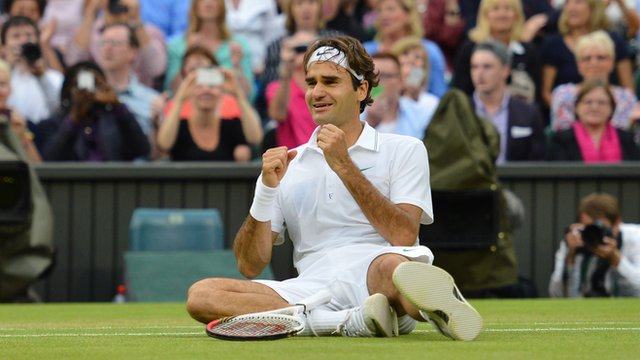 One major factor to take into account is the fellow big players are in midst of dilemmas and serious crisis which could propel Roger’s chances.

Djokovic tasted a huge dose of shock and was left traumatized at the French Open 3 weeks back when Stan Wawrinka snatched his chances of completing the Career Slam and join the elusive club. While Djokovic has not played any warm tournaments on grass (played Boodles Exhibition), he should be rejuvenated and is still the man to beat. Djokovic’s vanquisher Wawrinka isn’t the most elegant player on grass but no one can now write off the Swiss No.2 as enters Wimbledon as a multiple major winner.

Rafa Nadal has plummeted down the rankings and his drop has been nothing short of appalling. The Spaniard is languishing at No.10 along with losing his crown at Roland Garros (lost to Djokovic in QF). In 2015, he is more vulnerable than ever and fellow players no more fear the Mallorcan Matador.

Other contenders like Milos Raonic, Marin Cilic, Grigor Dimitrov, Kei Nishikori and Tomas Berdych are all struggling either for form or are recovering from injuries. This nicely opens up the chance for Federer to pounce on this opportunity and make the most of it. Thus this is the time for Federer to strike and get hold of the trophy again.

Federer’s biggest threat will be Scot Andy Murray. Murray is looked ominously good this year managing to win the Queen’s Club for a record 4th time. He has looked sharp and aggressive this year and with both Amelie Mauresmo and Swede Jonas Bjorkman in his coaching team, Murray should be a serious threat to Federer’s chances this year. As they say marriage has certainly changed his mindset and now he sports the demeanor of a winner and might just be able to replicate the form that saw him win Wimbledon in 2013.

His prospects to add another Grand Slam title are dwindling. How much longer Federer plans to play is a mystery even to him. This year’s Wimbledon tournament therefore has additional magnitude. Should a bit of good fortune land his way, perhaps Federer can reigntriumphant one more time. Possibly no.8 is on its way.

Following a storming start to her Wimbledon campaign this season, defending champ Petra Kvitova will move on to the second round...